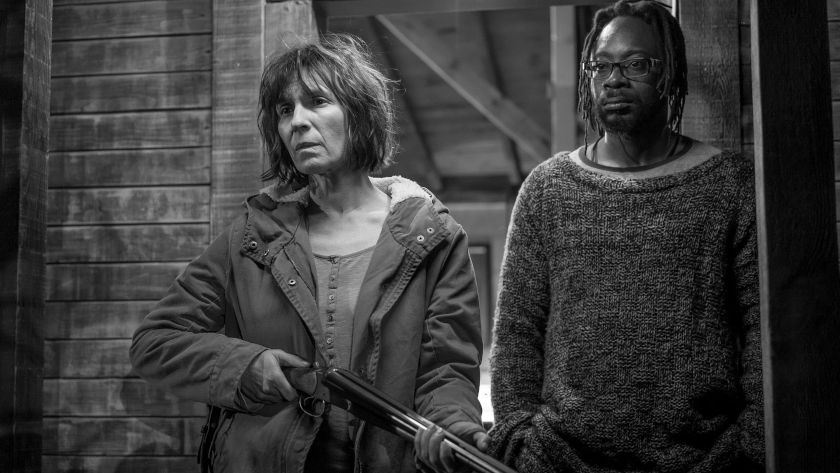 Svetla (played irrestistibly by Svetlana Yancheva), a Frances McDormand stubborn lookalike, is an unemployed teacher in a small village near the Bulgarian-Turkish borders. She is about to collect her last salary, and live off the memories of her first husband -died in the sea. Her usual cemetery routine is accompanied by hunting as her only sport activity, and unwanted sexual advances by local villagers (young and older) who still cannot fathom why Svtela won't have a man by her side.

Things are soon to change. The African Bamba (a sweet, unadulterated performance by Michael Fleming) becomes her trophy in one of Svetla's hunting exhibitions. He wants to go to Germany, and neither Svetla nor the mayor (to whom she turns for advice) have any solution. The language barrier being as present as ever, Svelta decides to host Bamba ('the African') in her place as a temporary measure.

Meanwhile, the village is about to be flooded by a group of non-documented Afghanistan immigrants; the local border guard officer has absolutely no interest in keeping them to the village, but still does not want to treat them badly out of fear for his superiors (and perhaps the press -as ruthless and demagogic as ever here). So, the whole village has to face both the Afghan refugee situation and Svetla's isolated, 'African' guest.

There is certainly a comedy of manners in both main characters, who need to get along in this poor and forgotten environment, full of fear and internalized prejudice. The story has been worked many times before, but Hristov still finds a frame of reference to make his characters relevant -especially when he juxtaposes them with the village bigotry. The whole village in Fear is a kaleidoscope of bigoted behaviour, directorially treated as if all of them were part of Milos Forman's Fireman's Ball (1967) cast. There is comic energy alternating with palpable threat; it is a wise decision to give individualized voices to all villagers, for then the source of threat (which will escalate when the film hits its midpoint) becomes both undetermined and inescapable as well.

Fear solidifies the relation between its two main characters in a timely fashion, before the inevitable community response hits -and laughs will suddenly stop. The film will turn the main character's obstinacy characteristic and her love of her land (think of Bette Davis in Aldrich's Hush Hush Sweet Charlotte [1964]) upside down; survival in that case will lead to abandon some of the long-gestating attachments.

There is fine grotesque humour and a sense of hard-won humanity in Fear, which focuses on the individual to light up the global. With a premise that won't fall into a Balkan rom-com genre type, the film becomes a moral fable of learning, embracing the unknown. It is finely acted, well-placed in its setting and immensely penetrating in the characteristics of folk small-mindedness.