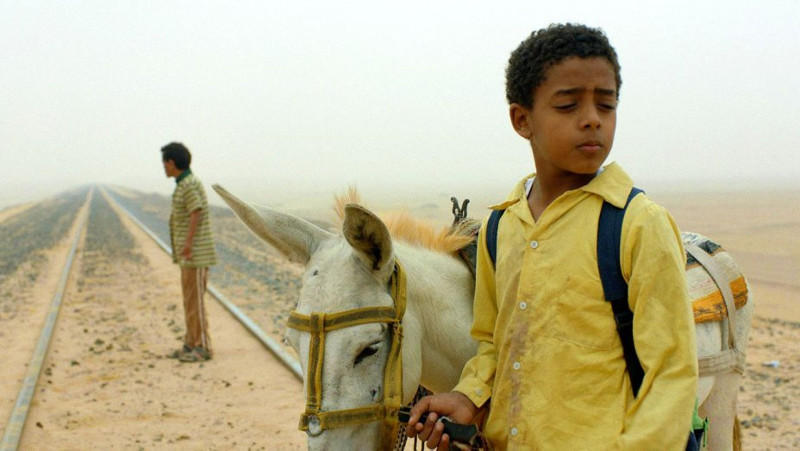 A Coptic Christian and a leper and an orphan Muslim boy named Obama go down the road, in another instantiation of the odd-couple road movie. Or is it different?

A.B. Shawky’s first feature film (funded partially by his alma mater, NYU’s Tisch School of the Arts) tells the story of ‘sick people’. These could be the members of Egypt’s Abu Zaabal leper colony; the 40-year-old male character, Beshay (Rady Gamal), himself a leper, still refers to them as ‘sick’, even though it seems that Egyptian bureaucracy in the colony administration has some dysfunctionality itself to blame for.

The calm, scarred but healed and inquisitive Beshay gets his own living by scavenging in the “Garbage Mountain” (first establishing shot), and we know he gets by. Obama (Ahmed Abdelhafiz) is his company, and a kid used to be beaten at the colony orphanage (the colony is a place for more outcasts than the lepers themselves). Beshay is married toIreny (Shoq Emara), whose mental illness leads to her death (a rather too quick way to get rid of his own emotional attachments). When Beshay finds out he was not even registered in the colony at the first place (but distinctly remembers family moments in flashbacks sections), he decides to go look for his father and family. He was, after all, the ‘Beast’ in family troubles (meaning, his not feeling pain was the sign of his disease). Obama with a distinct yellow, optimistic shirt will follow him -unlike Beshay, he has no friends in the colony; the three of them (their donkey Harby joins them) decide to find Beshay’s lost family; his father promised him to come back when he was cured, but never appeared since.

The place is Qena (north of Luxor), and Beshay is determined but not that ingenious to get himself out of trouble — and certainly Obama does not make things any easier. A series of episodes, where Beshay has to share prison and pray space with Muslim Egyptians, would suggest a different perspective to this well-crafted road drama (but this perspective is only hinted at here).

What comes instead is the usual (but charming) series of robbery incidents -Beshay had been warned after all, and an encounter with more outcasts (here, handicapped people). These good-meaning people will be able to help the two reach their destination.

‘Yomeddine’ means Judgment Day in Arabic, and one of its uses refers to animal’s judgment day, supposedly a smoothy affair. This is in contrast with what Beshay himself is ready to take responsibility for; he can cry out loud (rather clumsily scripted here) ‘I am a human being’ during a routine train inspection, and he always takes responsibility for Obama -but has to nudge a little bit about it. Yomeddine really wants to face social responsibility upfront, especially society’s responsibility to its fellow citizens: state records are kept but inaccurately so, family members would like to welcome brothers but still can’t make the first move, and prison officers would really like to have those outcasts outside their own purview.

The film is beautifully lit, and both main actors have their finest moments being together. As most road movies go, Yomeddine is more about being together than being somewhere: characters register more than their adventures, but its settings do reveal an Egypt that is not always shown in postcard videos. It has its moments when you really wish to (but can’t really do so) believe the character’s luck or drama; but there also times -train sequences here- when you really can’t take your eyes off this Beshay-Obama duo.

The film starts with a Newsweek 1990 Dick Tracy front cover, and ends with a joke on former US president ‘that guy on TV’. Audiovisual media and celebrities frame the film, but don’t really seem to matter that much. Here’s a friendship in the making.