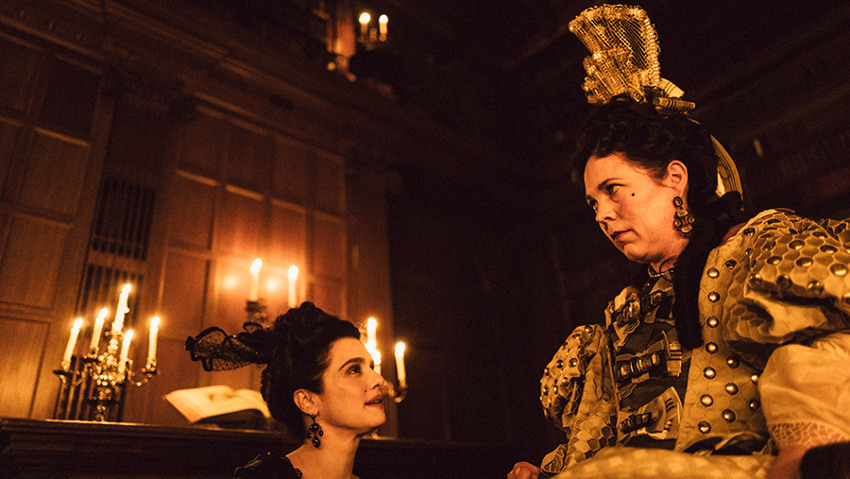 The Favourite | Film Review: Grab Yourself A Rabbit

A more than welcome addition to the brutally funny world (but without its weird look) by director Yorgos Lanthimos.

It is by now true to every serious-looking cinephile that a new Lanthimos film will certainly have marks of the bizarre, human and/or animal violence, and its own sense of deadpan humour. But while The Lobster brought the dystopian fantasy closer to home , and The Killing of the Sacred Deer made a Greek tragedy its own joke, the magnificently ebullient and bitter catastrophic comedy of The Favourite seems to bring Yorgos Lanthimos back to his comic roots -even with some physical violence overall.

Working with Deborah Davis and Tony McNamara's script on the ailing British Queen Anne (Olivia Colman), the surroundings (war with the French, taxes to be raised and country reactions to be expected) would invite a completely different film. But both script and direction put the emphasis on the games of power inside the royal court, and 2 more women come into play. Welcome the scheming but equally candid Sarah Churchil and Duchess of Marlborough (Rachel Weisz), who has a more intimate relationship with the Queen and a very extrovert relationship with the country's managing affairs - to the chagrin of landowner and Earl Robert Harley (Nicholas Hoult). The unaided Harley cannot put his peace proposals into action, until a new potential ally (and very good shooter as well) arrives.

Abigail Hill, Sarah's cousin with an erstwhile good name, but sold by her gambling father to a German, has to face the mud (and physical abuse) the first day she arrives to meet the Queen. Initially she will do menial work, but a little rubbing the Queen's always ailing feet can do miracles to her social climbing status -and lead to Sarah's attention.

The men handling only war, direct physical assault or simply spending themselves in derisory inconsequential games, it is left to the women to work on both sex politics and state politics altogether. And while it would be false to describe their efforts as bitching -here Cukor wouldn't have been more happier- what The Favourite really tells adamantly is that to be in power is to be in female company, whatever it takes. Be by yourself or with a man, and the outcome is dire.

Of course, since this is a Lanthimos film, animals need to place a big part as well, whether they are 17 rabbits to be nurtured by the Queen, ducks to participate in a race, birds to be shot (here's some Jean Renoir for you), and dance choreography who makes up for animal instinct.

The same goes for the mood of the film, its physical comedy (Emma Stone has to suffer a lot to achieve her best), frank dialogue lines ("you look like a badger" is a compliment here), a narrative that -unlike other Lanthimos' films- builds up suspense instead of diffusing it, and, of course the performances. Forget the deadpan line delivery of the Sacred Deer. Here there is flesh and bone in every turn of the head, every raising of the eyebrow, every falling off her chair in Olivia Colman's movements, who is the most enjoyable pathetic character in recent movie kingdoms (Colin Firth in The King's Speech was a hero by comparison). Rachel Weisz can be a wolf in disguise, but as the story goes, she's more hurt than hurting others, and is never the castle villain. Neither is Emma Stone, who can rise from rags to riches, and be as daring, seductive and decisive as all the men together in the court.

Lanthimos surrounds these brilliant performances with low angle camera placements, and fish-eyes which needs to tell that no perspective is sacred or even 'normal' enough ; cinematography takes a Barry Lyndon cue, and candle lights (DoP: Robbie Ryan) provide the bare minimum of court charm. It is a royal battlefield, anyway, and some old-fashioned looking dissolves (especially in the last scene) by Yorgos Mavropsaridis make it the case that the road from royal to human to animal is not that far.

For all Lanthimos followers, The Favourite will be his most accessible piece to date, but displaying the same pre-occupation with power games he has shown since Dogtooth (2009). For audiences unfamiliar with the Greek Weird Wave, this would be a welcome introduction to a non-weird looking, but still brutal comedy of royal manners and immensely enjoyable -like a guilty pleasure of soaking yourself in a hot chocolate bath, and pretending you're in power.