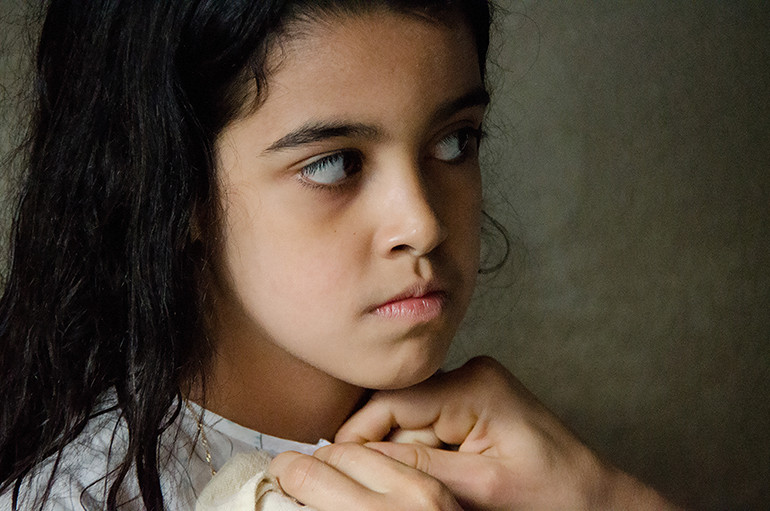 In 25 words or less - Skilled treatment of the magical element  and smooth pacing in a doomed father-daughter relationship story, which sometimes seems to be too self-contained for its own good.

Using the supernatural aid to tell a story not easily expressed in the characters' own words, The Father's Shadow (A Sombra Do Pai), the second feature by Brazilian writer-director Gabriela Amaral Almeida (after her 2017 Friendly Beast), has  participating in Sundance's Director Lab,

The Father's Shadow unfolds in Brazil's São Paulo, where the lower social strata of the society which somehow need to find their way through. We first meet Cristina (Luciana Paes), long-haired and an amateur but fervent supporter of magic, which would help her put in order her love affairs. A strong adult female presence in bricklayer Jorge's (Julio Machado) household, she lives along with him and her niece Dalva. The 9-year-old Dalva (Nina Medeiros), keeping a stiff upper lip in the whole story, resourceful and equally prone to magic tricks herself (aided by her George Romero repeated TV film viewings) will still not get over her mother's death, but she will soon learn that is her father she needs to take care of.

When Cristina announces her decision to live with her beau in their own place, both Dalva and Jorge have to face what is really a locked-in relationship. Their encounters mostly taking place in their inadequately lit rooms (and their single outdoor activity will prove to be a disaster), Jorge becomes more and more self-absorbed, while his working environment is falling apart; a suicide of his best friend and co-worker will suddenly bring strange incidents and moods to Jorge, from which Dalva will try to relieve him -in her own way.

The Father's Shadow is indebted to Victor Erice's children affinity for the supernatural, but Jorge's character seems like a São Paulo equivalent of Christopher Eccleston's otherworldly character in Alejandro Amenábar's The Others. What war did to the absent husband of the latter Spanish horror film, the constant reminder of death brings to the zombie-like demeanour of Jorge, certainly the most engaging character in the film -with his constant failure to communicate, and his eventual resignation.

There are small magic moments that count in The Father's Shadow, like Dalva's classmate Abigail (Clara Maura) attempt to perform her own magic tricks to hurt her baby brother -to forewarn us about the film's eventual solution. There are also moments of comic relief, welcome to the horror trope, headed by the goofy goji berry business initiative of Cristina's more westernized boyfriend, Elton (Rafael Raposo).  Dalva herself will practice a lot of magic tricks; her props, carefully placed dolls, both in the drawers and underground, are ready to tell us the story from the film's start. But the element of surprise here is not how or why magic will happen, but when and to whom it may concern. Jorge may seem to be the most immediate target, and the scene breakdown naturally leads to it.

But there has to be something more than a personal family story of abandonment; it looks hidden on the linen drying on the ropes at night, the ants attempting to cover a doll's face on the ground. There are stories about love and death, guilt and failed expectations ready to be expressed (add the interesting subplot of Cristina, rather abandoned during the course of film), but not exactly spelled out in detail and loud enough in this otherwise welcome story of death occupying mortals. The film looks for causes when its characters look only for actions or inaction; still that wouldn't hinder anyone with an affinity for symbolism and horror in independent filmmaking to watch this careful scheduled progress of love relocation into the zombie realm.