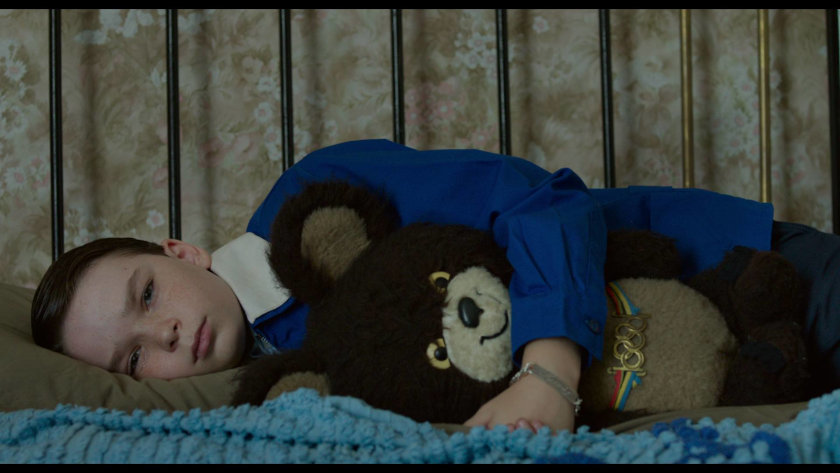 The Greek/French/Bulgarian film Son of Sofia by Elina Psykou works like a cautious (and perhaps too cautious) initiation into the magical mind of a kid who had better grow up. Set during the 2004 Summer Olympic Games, it has 11-year-old solemn and easily hurt Misha (Viktor Khomut) to travel from Russia to live with his mother -meeting at the airport a Russian athletic team for his welcome.

His Ukrainian mother Sofia (Valery Tcheplanowa) works for Nikos (a commanding presence from Thanasis Papageorgiou), an elderly, old-school Greek man;  Nikos' only concern in his immaculately old-fashioned home is his glorious TV past as bona fide fairytale storyteller and educator of Greek children -and a harsh, but not strictly abusive education format at home. A more of a relic of another Greek era, Nikos wants to be a new father to Misha -in his own, antiquated way.

Misha is uninformed of the situation, and the marriage between Sofia and Nikos, of which he has no idea; his reaction is to withdraw even more to himself, and start living his magical fantasy games.

The film unfolds its narrative trajectory as a formalist fantasy, best rendered in interiors. The almost impeccable placing of props in Pinelopi Valti's art direction and the central framing of the early sequences suggest a deeply held drama that is ready to expand. It will not always fulfil this prophecy. Son of Sofia's exterior scenes look perfunctory, even though Misha is well acquainted with other Eastern European young outcasts -a reminder of the big bad wolf outside his own suffocated, adopted home.

The first, setting-the-stage act of the film is a fine, Mediterrenean formalistic experiment to behold, where Sofia gradually loses control of Misha, and needs to be literally in the middle between her own past and son, and her own present and husband. Misha will also learn how to explore the 2004 Athens streets, even though he is prudent enough not to move into downright juvenile delinquency.

Which makes the second act of the film(and its main character) and its resolution a bit indecisive in its tone and intentions; while Misha goes deeper into his fantasies, and learns to share them with everyone (except his mum), Son of Sofia won't really tell if Misha is an angry or just a deeply depressed kid. The old adage that if you're going to show a gun in the first scene, you had better use it, still applies here. Misha both shows a gun, and uses it -even though its outcome is not as potent as it should look like.

Between Alais Resnais symbolisms and Stanley Kubrick naughty bears, Son of Sofia needs to expand its individual isolation story in a manner more solid and conspicuous; but the coming-of-age story which is effectively thwarted, and the environment of championship as a fake goal to be attained is evidenced in this crisply edited film, full of fairytale characters vying for attention.