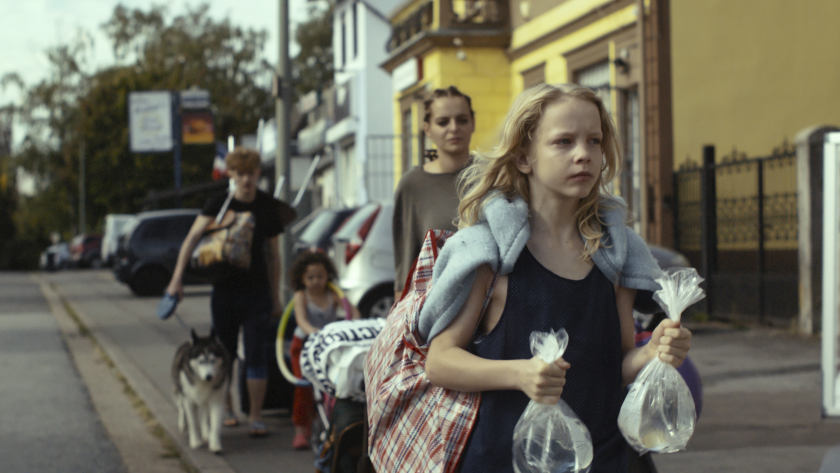 Samuel Theis' sophomore feature 'Softie' (after winning the Camera d' Or for Party Girl in 2014), now in Cannes' Critics Week (Special Screening) is an ultimately intellectually affecting coming-of-age drama, whose main character needs just to make some smart, calculated moves to elicit audience identification with a kid who needs to get the troubles of others in his own back as well.

Working with a script that maps its main character's beats in a progressively escalating way, Theis presents 10-year-old blond and blue-eyed inquisitive Johnny (Aliocha Reinert), ready to move to Northeastern France (Forbach). His temperamental father is soon to vanish from the scene, while his troubled mother (Mélissa Olexa) is alternatively loving and negligent. It seems that in his new home, Johnny has become the head of the household, taking care of his little sister Melissa -and unlike his bigger brother, he is too soft to claim officially the role of young padre famiglia.

Torn between endurance, a little incident of school bullying and the need to find more intellectual things, he suddenly meets his new teacher Mr. Adamski (Antoine Reinartz). Adamski knows how to go beyond the curriculum, and, at the same time, he teaches children simply survival tactics that Johnny desperately needs.

Softie is torn between representation of a mundane (but still beautifully lit) provincial environment, and depiction of Johnny's own (still confused, but potent) dreaming aspirations. Johnny knows what he doesn't want; and the film seems to spend too much time in setting the stage for what is already evident from the first two scenes. It is as if Theis himself wants to warn us what it is to let the time pass by doing nothing.

Yet, an uncalled invitation, seduction tips from older kids make Johnny make his own move to his object of both affection and admiration. Less blatant than Elio in 'Call Me By Your Name' (2017) and less enigmatic than Tadzio in Visconti's 'Death in Venice' (1971), Johnny surely has a plan -but not a foolproof one.

Johnny's character (and Aliocha Reinert's earnest, inquisitive performance) are the best thing in a film that navigates the space from failed social opportunities to the dangers of the marginal life (Johnny brother's tunnel friends) to Centre Pompidou-Metz museum night visit. Never a desire solely by itself, it's the intellectual world that fascinates Johnny and puts his own desire in place.

The film has alternately scenes of seduction, rage (especially when Johnny turns against his mother and the family he lives in); still, one of the most poignant ones is in the beginning of the film, where Johnny, photographed from a low angle, holds his two goldfish, each one in his hand amidst all the movement furore. He needs to put them into the aquarium otherwise they'll die. It is a sense of sudden self-preservation, an instinct Johnny needs to acquire, that runs throughout the film, and gives for its most part, a sense of well-known battle to become a self-standing yet still dreaming adult. Whenever the film lets its protagonist take the reins, Softie feels both hazy and strong-willed -and that's a good thing.