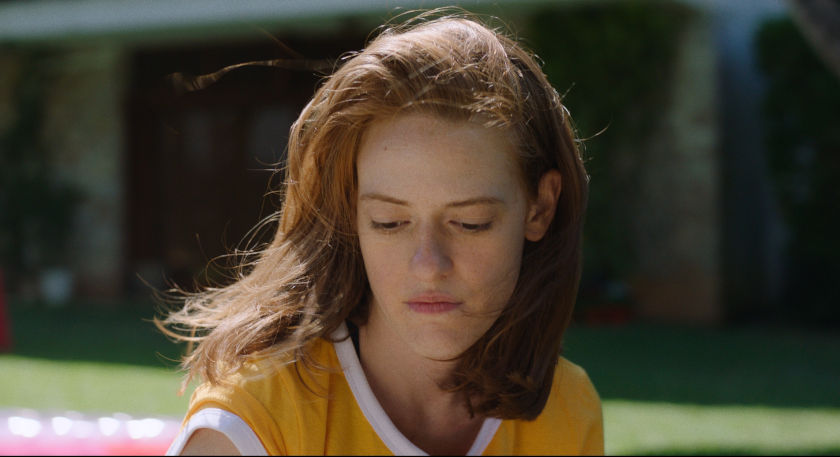 There is no place like home. And family home is the epicenter of the deeply empathetic (though uncanny at times), first feature film by Greek director Jacqueline Lentzou. Lentzou (Hector Malot: The Last Day of the Year, The Fox) has made a name by focusing on first-person intimate yet accessible accounts of youngsters in trauma. In her Moon, 66 Questions, a Greek-French co-production, she expands her universe with a story that is both relatable without being prosaic.

Artemis (Sofia Kokkali, Lentzou's frequent collaborator), a young girl who seems to celebrate her own diaries more than her friends' companion, returns to Athens to visit her estranged father Paris (Lazaros Georgakopoulos). She needs to help him with his frail state of health. Suffering from multiple sclerosis, Paris needs to be under 24h constant care; his longtime friend Iacovos (Nikitas Tsakiroglou) is always a welcome friend, yet being outside of the family circle,  he cannot undertake that responsibility. Artemis' mother has made a new life and home for herself, and certainly does not want to face the ghosts of her past. (Her encounters with Artemis only occur out in the street, never at home).

Artemis has also to face a grotesque council of the elder relatives, who pretend to look for an immigrant helper as an excuse to alleviate their own responsibilities. In effect, Artemis is all by herself with a father who seems to be even harsher and more difficult when she's herself around.

Lentzou builds up her drama as a juxtaposition of the two characters, but not a direct confrontation. We are introduced from frame zero to video recordings dated between 1996-1998, which tend to look like a parade of outdoor activities; at the same time, Artemis' own narration of her diaries makes up for a dissonant note. It is clear that those video materials are not her own material. The fact of belonging and ownership of your own truth between past and present now becomes a persistent theme.

In the surface, though, Moon, 66 Questions, looks more like an exercise in coping with a physical illness, and the dipole of mobility /immobility feels prominent in the film. Yet Lentzou is not interested per se in detailing the challenges of home-based care; this a pretext to engage the audience, which won't really bother with the exact prognosis and condition of Lazaros' health. There is observation here; not a clinical and detached one, but a cinematic one. At all times, Artemis is the one who observes and narrates; the camera follows all others as they were a spectacle to be studied than a case to be healed. It is Artemis' story all along, who needs to investigate her own estrangement from her father. In so doing, she resorts to even more imitations of reduced mobility -or  she performs just the opposite, orchestrating a frenetic, vertiginous movement to the tunes of a Greek old pop song about letting go.

It won't always work, and this puts the plot in a weird wave, Attenberg (Rachel Tsangaris) territory that the film does not really belong. Yet it is no secret that the isolated Artemis (her friends and their Instagram flirting worries are for her an uninteresting pretense of social life) needs to move first in her  own habitat in any way she can in order to understand at last.

Both production design and cinematography leaves plenty of room to breathe and negotiate in an atmosphere which is the opposite of claustrophobic; the relationship between father and daughter (a near-perfect chemistry of estrangement from both Kokkali and Georgakopoulos) is a two-hander that invokes a more Mediterrenean version of Agnieszka Holland's Angry Harvest (1985), another director that combines the dramatic and traumatic with the intimate.

The plot twist itself looks quaint by comparison, and too thin to keep the film's narrative trajectory on its shoulders. Yet there are indelible images and scenes on the film (like the car memories trashed); and the carefully considered shot sequence makes Moon, 66 Questions an unfolding diary that really hooks the viewer. Moon, 66 Questions is at heart a familiar reconciliation attempt and story, which takes you by the hand to witness a first-person personal crisis. Its tropes sometimes will lead you astray, but it moves you all along.