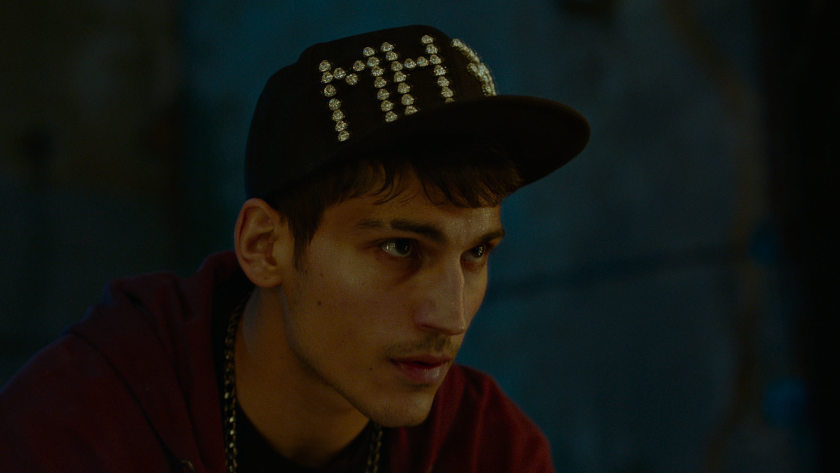 A certain urgency and a certain calmness permeates the representation of a fictional Istanbul slum, called 'Karacinar' in Turkish writer-director's Nisan Dağ sophomore feature (her debut feature Across the Sea appeared in 2015, co-directed with Esra Saydam).

Starting her film career from both animation and documentary roots, Nisan Dağ employs both means to showcase a young hip-hop culture in a really impoverished Istanbul neighborhood (with a high-crime rate) and set up the fictional means for at least some of the characters' salvation.

Fehmi (a really persuasive Oktay Çubuk) is a talented 19-year-old rapper addicted to the cheap drug bonzai; he lives with his father, and shares a part-time job with his closeted gay brother; his failure to meet his job's duties is matched by his talent and willingness to be 'one of the boys'. He dreams of becoming big in a community of friends which adores Tupac and Nicki Minaj. He is both rebellious and religious, considerate and uncaring, easy-going and impossible.

When Fehmi meets the 25-year-old dj Devin (Hayal Köseoğlu), he decides to navigate a path less known into the upper-class neighborhood status. Dağ mostly states rather than investigates class difference in the film; in the end, it becomes a rehearsed but still fresh story of an addict and his partner -familiar to cinemagoers since Preminger's The Man With the Golden Arm (1957).

Fermi as the central character and his own fragility is the best thing in a film which still wants to investigate the story of a whole neighborhood, but its running time and central story makes it almost impossible; Da Poet's rap and Dhash and Aytug Tunal/Hayki lyrics make up for an edgy youth statement, while cinematography alternates between elevating marvelous Istanbul sunset viewed from a terrace and accompanying its subjects in less serene locations.

In many ways, the narrative trajectory leaves a lot of space to Fermi to actually both fall and rise up again. The animation sequences (by KIM & HIM) on the other hand, add a more intense level of being addicted.

When I'm done dying definitely wants to focus on a positive light on the power of music to tell things that the conservative environment either forbids or simply neglects. It does well by not focusing on being a famed career freak; its love story is engaging but not particular enough to hold the film in its shoulders. It's Fermi himself as a central power of indecision who makes the films and its surroundings take an energetic, and a rewarding turn.