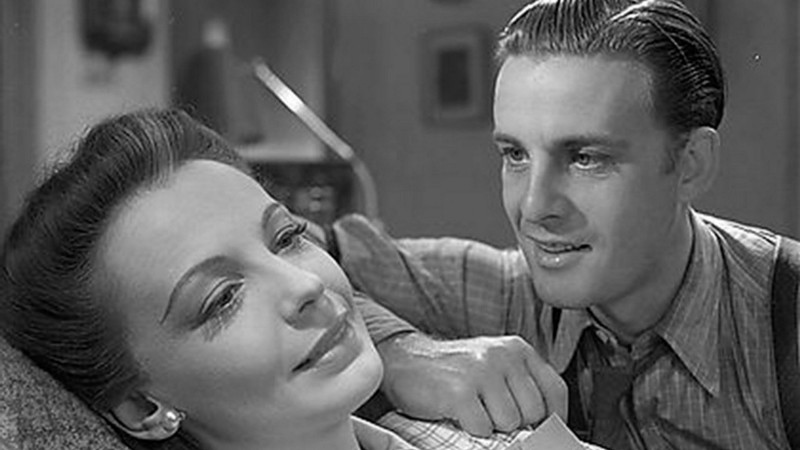 What would have happened if Ingmar Berman suddenly became a genre (and a film-noir for that) director?

Probably nothing of much importance, but surely the great Swedish master had a few wildcards in his pocket for the spy, anti-communist thriller “This Can’t Happen Here” (Sånt händer inte här)

Filmed a year after the seminal The Third Man (1949), the film title needs to tell that despite appearances, spy things can happen in the WWII-neutral Sweden. Many Eastern European fled from their home countries after Soviet Union prevailed (among them, many Estonian actors, who have some fine presence in Bergman’s) film. The film’s plot elaborates on those facts; Vera (Signe Hasso) is a well-to-do Stockholm immigrant and fine chemist, who despises her scheming husband Atkä Natas (Ulf Palme), but needs to keep him close because of her parents still in her native country, and in danger. Natas is an Eastern spy (Venetian blinds and all files) who needs urgently to talk to US embassy officials. Vera has also a former and still wannabe future lover, the policeman Almkvist (Alf Kjellin). The three of them will bump into each other over coffee, hypodermic needles and (badly directed) car chases.

Unlike Carol Reed, Bergman is not interested that much the genre tropes of a city in danger; (and, as the legend says, he didn’t even want people to see his fim). His spy thriller is mostly shot in flats, where both couples and communities can dream of a better future (the film’s first scene include a wedding between two immigrants, in an interesting but brief subplot). The Swedish director invests time in his actors, and (this would be no secret to Bergman afficionados) to his actresses. Signe Hasso is beautifully lit, and her performance dominates the scene in the first half of the film, where she takes the lead -and gets a shot with closets that brings to mind a brief glimple of what is to follow in Through A Glass Darkly (1961).

After that, the film loses steam, and punches with external agents coming to scare both Natas and Vera are less interesting here. More to the point are brief comments about God and sin, a vicar’s presence as the head of the refugee community, and Sunday mass being too loud for the neighbors (one of the film’s comic reliefs). It seems that if Bergman had his way, God would be the arch-schemer here.

And, of course, the theater, one of Bergman’s preoccupations, takes center stage in more than one occasions; it can provide shelter for people who need to hide and mask. As well as the cinema; Disney films are to be screened in clandestine community refugees meetings, which are organized behind those screens; the Donald Duck shrieks are not a good omen for what is to become.

This Can’t Happen Here does not add up, in terms of script, to a satisfying thriller; but, concerning the material, is not an effort for which a young Ingmar Bergman should be ashamed of. View it in context, and you can see at points the penchant for inner torments, as well as the family situations and celebrations of much later films of the director. It was made as a work for hire; if you now hire yourself for 90 minutes in the antiquated world of Liquidatzia (allegorical for Soviet Union), but still good-looking Stockholm, you can enjoy some of its merits, including the production design and cinematography by Gunnar Fischer (also in The Seventh Seal). The film is not something to brag about, but still entertaining in its own contextual way.