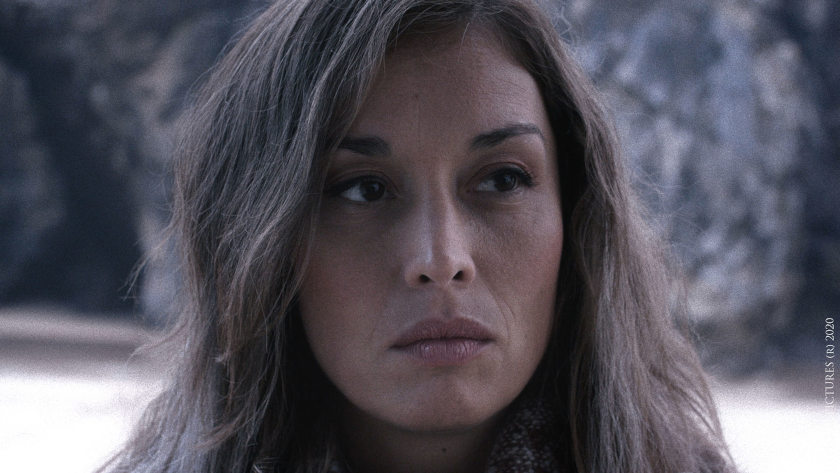 Film review for the Portuguese feature Submission by Leonardo Antonio (2020).

Submission, the third film by Portuguese director, Leonardo Antonio, opens and ends with a seascape, tuned in (the begginning) to the Norwegian lullaby “Så ro godt barn” (Sleep Well, Good Child), a children lullaby. Unlike Rosemary's Baby, the child is not the danger here, but the main character has to endure some of the tribulations (but not the paranoia) Polanski's heroine had to face.

Lúcia (a solid and fragile Iolanda Laranjeiro) is a working-class woman, married (but not happily married) to a prominent doctor in Lisbon. The film finds Lúcia having dinner with both her husband and his parents, before cutting to a burst of tears and her going out on the streets and the police station. What happens afterwards is the first part in the carefully dissected (both in words and images) anatomy of a rape. Miguel has clearly raped Lúcia, yet she's the one who needs to prove it, both by a painstaking examination and police questionnaire (by a man officer) and by revealing any injuries she might have had.

Finding refuge to a friend's home, Lúcia starts preparing her own defense; she's been informed by the assistant district attorney (Maria João Abreu) that her case will need to be tightly argued for, for marital rape is a crime that is seen very differently from other rape cases in a still male-dominated justice personnel. Her father-in-law being a attorney himself, Lúcia suddenly seems to be all by herself in her struggle.

This is the kinf of material that could easily fall into social protest territory; sometimes Submission does slips into considerate but rehashed thoughts about media as the last resort of the oppressed and notions of a whole system working against the individual. Yet, for the most part, the film offers a period in a life of a woman who simply needs to endure (also financially) a long procedure of waiting before her time comes to tell it all. Antonio builds up both anticipation and compassion in the first part of his film, and stays really close to his character; without even showing the husband's face in the first part of the film, Lúcia is shown trying to understand what's happened to her. And, at the same time, she's herself looking for a job, and having to face another surprise along the way.

The tone of the film aligns with realism, but still shies away from the mundane and the misery; Iolanda Laranjeiro still glows even after a traumatic event, and she's surrounded by characters who will definitely offer an aid to get to the second, more intense part, and court scene.

The film has a remarkable tempo that condenses time spent in its essential, mitigated with bird-eye view shots of grey Lisbon buildings, a city without its usual sunlit glory. It needs to cross a fine line between avoid victimizing Lúcia (she's perfectly well to handle her own affairs here), condemning patriarchy but not men as a whole, and still make her case individual enough -even though Leonardo Antonio has an impressive amount of background research into both domestic abuse and rape incidents.

The catalyst here is (interestingly) the husband's own statement, which will both confirm and negate Lúcia's own claim. The extended court scene of the first part is the sort of a painstaking, verbal anatomy of a person's sexual life that is as close to abuse (or, at least harassment) as the actual act of rape itself. Lúcia won't need to fight for injustice against women as a whole; she will need to defend her own sexual life (or the lack of it) in as many details as possible. Dialogue here is the knife in an almost still scenery that builds the film's momentum up to the very end, with the intimate details now becoming a weapon for or against a person's own dignity.

Submission sometimes is frightened by its own act to present the patriarchal view and related accusations against the wife's 'neglect' of her husband in such a clear light; the film still wants to protect Lúcia too much, by giving her an unnecessary love interest, as if we have to be shown that she's capable of genuine love and affection. Yet, otherwise Submission is both honest in its intentions, researched in its main character depiction and gripping in its content.