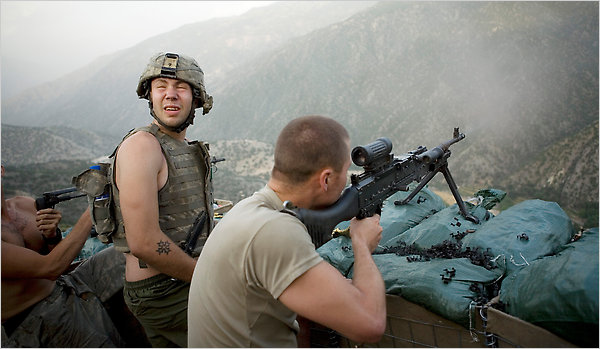 Tim Hetherington and Sebastian Junger present a bare-bones account of the Afghanistan war.

Restrepo builds up from the first moment like the inverse of Capra's Lost Horizon. An adventure in neverland involves people built up to fight ceaselessly, with no aim. The happy ending is their leaving this place.<br /> <br /> A year chronicle of the Second Platoon in Korengal Valley by Sebastian Junger and Tim Hetherington,

Restrepo does not ask political questions, and the exercise in war morale that the commanding sergeant asks for his soldiers is rather an effort on comradeship than a paper on war tactic.

The vastness of the valley registers, and so does the invisibility of the enemy. Constant firings from nowhere-to-be-seen targets lead almost the whole film, whereas interviews back in Italy (after the platoon deployment) add the sentiment of loss and mourning for one's own friends.

Restrepo is the name of a deceased soldier and the construction the platoon tries to make, in order to secure a food road to the village. Locals (mostly elders) seem eager to confirm the naive Westernized view of people ready to cooperate with Talibans and at the same time get what they can from the Americans.

The second part of the film, the Rock Avalanche section is built up with tension, pain and suspense. But the complete restraint of Restrepo in sentimentality works against its own purposes. The war chronicle becomes after a while a narration of terrible incidents, none of them seen on screen. And if The Hurt Locker was accused for embracing a testosterone-led war attitude, Restrepo seems dangerously close to embrace the 'war as usual' tactic.

No sign of depression, anger or futility haunts those soldiers. Even though they claim being treated and sleepless, their faces betray only sorrow and hope for the best. The line of duty supersedes humanity.<br /> <br /> If the sheer vastness of danger and sad faces is what the war is about, then surely this is not the worst depiction of it.

Restrepo is faithful to its source, but not risky enough to dig into the material it presents.