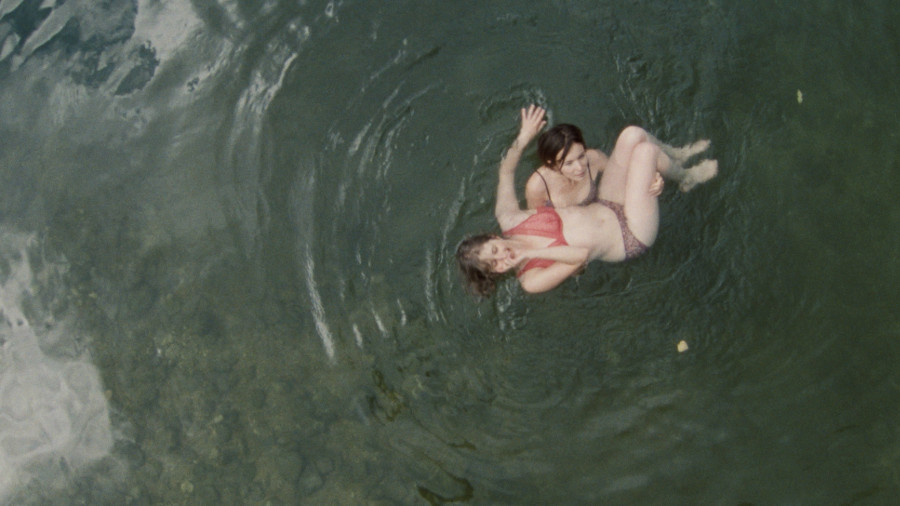 Head Above Water | Film Review: It Pays to Be A Family

Tatiana Margaux Bonhomme digs deep into the workings of a family who needs to stay together to actually function as such.

In 25 words (or less): A splendid drama of two sisters who need to hold together against odds, with two great performances to match.

If can't use your hand, you need to climb up using both your head and legs. This is the first piece of advice the alpinist François (Cédric Kah) gives to his daughter Elisa (Diane Rouxel), in the beautifully unsettling first feature by Tatiana Margaux Bonhomme,  Head Above Water.

The original French title Marche ou Crève (Walk or Die) would be more in place here, for it reveals the inner fight a 17-year-olda girl has to make to be together with her own sister and family.  Starting from the world of photography, and based on a autobiographical story, director Tatiana Margaux Bonhomme expanded on a theme of a young girl who has to look after her sister in need. When her mother (Agathe Dronne) will leave their house in Vercors, France, unable to copy with her needs at home, both Elisa and her father will have to walk hard to maintain family balance.

Manon (Jeanne Cohendy) is not a mentally ill person, as Elisa insists shouting at an unwelcome care helper -she is simply handicapped. The absence of her mother won't make things easier for Manon, who, from the film's beginning is restless, agitated but ready to by consoled by both her father and sister.

Tatiana Margaux Bonhomme (who also writes the script) has both François' and Elisa's predicament aggravated by their non-family works. François seems to have a happier time with Manon; a road trip could be a momentary cure, and music keeps them both together.  Of course, this would automatically entail a lower social status for him, for he cannot commit to any work opportunities (and the film makes sure he is scorned by his co-workers).

But Elisa faces a more difficult situation, and her outward cool behaviour belies her problems. Ready to work part-time, and leave her high school, she has the summer of her life available to be committed to her sister; she can also justifiably badmouth all those who can't accept her sister's handicap in public. Elisa's narrative arc (script also written by Tatiana Margaux Bonhomme)  showcases the change he has suddenly to face: from being a caring sister to a 24h family nurse, still caring. It is she who should make the decisions (not her somewhat resigned father), and  the summer clock is a silent ticking bomb as well.

It is her own story, of course: a case of a young and caring girl who wants to be committed when no one else outside her father seems to do so. Elisa's affairs follow the pattern of her jobs (part-time, and not because of her own will). The turning point will arise when Manon will be seen walking (not swimming) to the water, waiting for Elisa's help. This is one of the scenes that can really  make the audience gasp in anticipation of the next move.

Shot in Super16 camera and in square format, Bonhomme creates a cinematic frame full of faces and bodies vying for joint attention, and rapid editing leaves no room for meditation. Manon's future is the family problem to be solved, as quickly as possible. Manon herself senses both the absence and the caring hands; at some point, she seems to get lost in her favorite music and dance routines; at others, she simply withdraws to her own (always loud) worries.

These two beautifully drawn characters are acted by extraordinary performances by Diane Rouxel and Jeanne Cohendy. Rouxel has the most turning points of the two, having to portray a character making harsh decisions without losing her youth in the process.  But Cohendy has the most demanding physical job, expressing with movements, sounds, hand gestures what complete words cannot really convey. The actress spent almost 18 months with Tatiana Margaux Bonhomme to learn the part (the initial intention was for a handicapped person to play herself, but this was quickly shelved). The effort registers: Manon as played by Cohendy, is a pressing case to be solved -nothing more and, certainly, no less than that.

Without a bit of sentimentality, this is neither a portrait of disability nor a character study of a handicapped person. Head Above Water is a case -as most cinematic cases are- of making the decisions. In this cases,  decisions will regard your own family life. Getting everyone else to agree, as the last ride with the whole family shows, is what cannot be left out. And the engrossing family drama of Head Above Water knows when is the right time to do so.