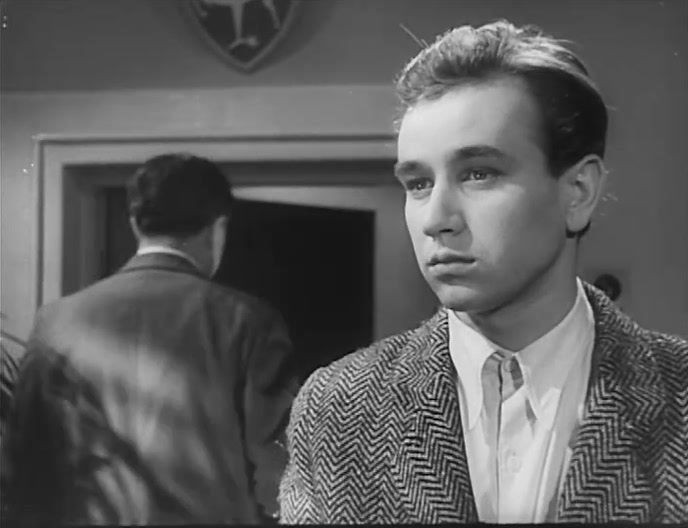 It's always interesting to mix American, noir sensibilities with Eastern European attention to social and political predicament. Vytautas Žalakevičius, a director always interested in Latin America -and awarded for his efforts during the Soviet Lithuanian period- concocted Adam Wants to Be A Man (Adomas nori būti žmogumi) in 1959.

Vytautas Puodžiukaitis (a face which always signals poetic vulnerability in the film) plays the main character Adam, a young and unemployed man with a lot of dreams. His close friend is the Captain (Juozas Miltinis), initiating him to Latin American secrets (even from afar); his love interest is the under-aged Liuce (Audrone Bajerciute). The underage status moves the storytelling threads in the film, in more ways than one.

The usual Socialist scenery of the bad American crook (Vaclovas Bledis), who sometimes needs to ally with the local bourgeoisie of the emigration bureau (Donatas Banionis of Solaris) is in place here; local workers have their own representative in the bold Piatras (Stasys Petronaitis). However, beyond the stylized story framework, a different kind of stylization takes place. Žalakevičius seems to know his cinematography and camera angles details from luminaries such as Orson Welles and Carol Reed; his lighting and use of locales brings to mind Vigo's L'Atalante, and Josef von Sternberg's Docks of New York (1929).  It is a cruel world out there, but one that can be made beautiful by people dreaming out and visualize both their dreams and nightmares.

Too intricate for its own sake for modern purposes, Adam Wants To Become A Man still has strong young leads to portray eloquently their first love affair; their unfulfilled dreams matter to audience, covered inside staircases, trains passing and jewellery particles lying scattered on the floor - almost like their own stories.