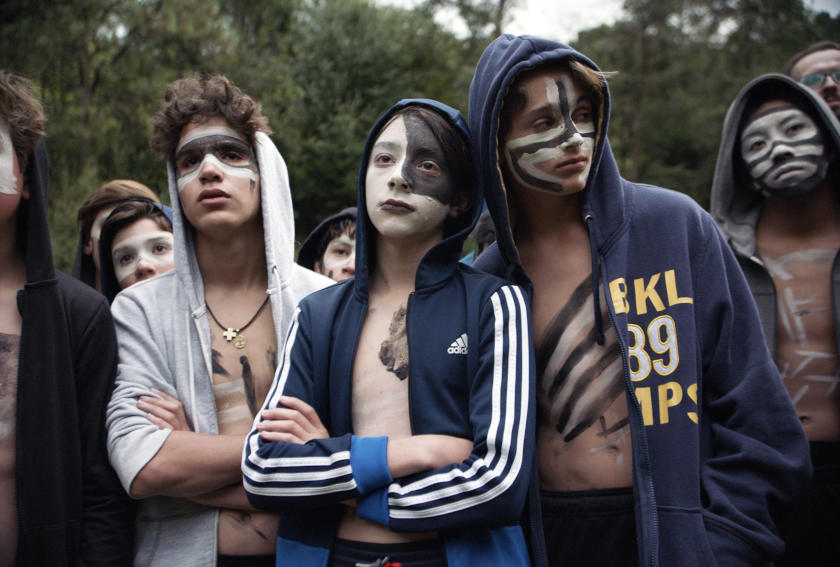 Vassilis Kroustallis reviews the Venice Orizzonti Mexican-Polish film, The Hole in the Fence.

There are tribes and tribulations in Mexican director Joaquín del Paso's The Hole in the Fence, his second feature, and a direct if not consistenly satisfying critique of closeted cult mores. Based on semi-autobiographical events, and amassing an impressive groups of child actors, the film (which premiered at the Orizzonti Section of the 78th Venice Film Festival) tells the story of young boys spending their summer in a Catholic summer camp. Even though they themselves have gone there for the sports opportunities, it is clear from the start -as exemplified by their counselors, professor Monteros (Enrique Lascuráin) and Stuhr (Jacek Poniedziałek) - that they are mostly the objects of sporting and other activities rather than the real agents.

A menagerie of characters, from the revolutionary Jordi (Valeria Lamm) to the physically handicapped Diego (Erick Walker), who is barren from every physical activity, show from the start that the macho attitude is the antidote to perceived danger. While the obvious system of Los Pinos school is 'posture - punctuality - penance', the real lesson for those kids from various social backgrounds is to imitate a fake macho attitude -a hero or a martyr.

Joaquín del Paso adopts a semi-realistic style in his handling of the various incidents before the climax of the film, the rally -more like a Christian crusade and one of the most pivotal scenes of the film itself. Before that, the film simmers with everyday incidents that need to break down tenderness in young hearts; but it won't always amount to a horrifying outcome, as if the (ruthless) professors are afraid to test their own limits in torturing. The scene that most convincingly still stays in the mind is finding the culprit for a 'lost and eaten' piece of cake; the ordeal there, with students turning against their fellow students is a model of what the whole film would come to.

Some stories are more developed than others, with Diego's own story (by definition, the less 'manly' one) bookending the whole film, and one of the characters that you really care about. Also interesting are the dynamics between the various teachers and counsellors; closeted teachers, and teachers that you feel were manipulated as kids by the same counsellors -now turning into 'friendly persuasion' weapons.

The external danger is obviously used as a weapon of oppression, even if the film will spent fewer time in depicting the really desparate but truthful faces of the Mexicans outside the camp. Death is also presented as entertainnment in the a cappella opera rendition, again one of the few pleasures camp boy residents have. Overall, The Hole in the Fence is an skillful attempt to bring a reality usually (and understandably) hidden from view; it will mobilize its various actors in an orchestrated way. It will not integrate that experience into a collective cry for self-determination and it will take its time to ignite such a need, but it will definitely point out that such choices are very sparse indeed.

The Hole in the Fence premiered at the Orizzonti Section at the 78th Venice Film Festival.