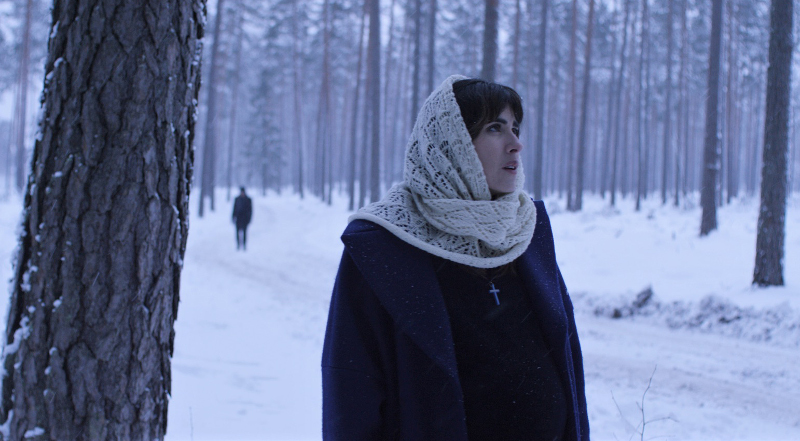 25 words or less: A well-concocted metaphysical thriller of a Greek couple in Siberia which sometimes sacrifices explanations to go for mutual destruction.

It pays to be a Greek couple in Siberia.  Greek director Angelos Frantzis, in his 6th feature to date, takes the Polanski route of Rosemary's Baby to put a young couple, Anna (Katia Goulioni) and Petros (Angelos Konstantinou) into questions of personal and religious faith, distress and finally abandonment.

But whereas Polanski goes for New York apartments, Frantzis moves to Siberia (in actuality, the icy forests of Latvia). During a never-ending winter, civil engineer Petros, a good-looking and ambitious and intellectual guy (watch these glasses) has a proof task: he has to convince Siberian state officials that the route of the river in their area has to be diverted, otherwise a major environmental catastrophe will ensue. It will not help a  bit that the point of diverting is adjacent to an Orthodox Church and its somehow sacred water. Both locals and officials in spacious meeting rooms will counteract his proposals, ask for alternative plans, and do whatever they can to put him off the tracks.

Still, this is not Petros' major issue to worry about. Anna will suddenly announce him that she's pregnant, even though the sex dates won't add up to the math. Anna insists that she has never been with anyone,  except  perhaps (in her dream, as she claims) with a young blond athletic Russian. He is lately to be revealed as the swimming champion Leonynt Burzak (Kirils Zaicevs).

There is more. Anna secretly takes Russian language lessοns with a middle-aged local teacher (Indra Burkovska);  there is also a whole menagerie of local city characters, who rejoice, enjoy birthdays with Anna, are too religious to go unnoticed, and they only share their house with Anna; Petros will be always an outsider in these still warm house surroundings, a fine specimen of well-placed production design.

The majestic cinematography of Simon Beaufils is not here used by Frantzis to meditate or invest in the surroundings. Siberia will always be an unwelcome partner, used to escalate conflicts between proof and faith, while not offering  a clean-cut solution. Still River is still a character drama, for all its finely-placed religious overtones. Both Anna and Petros follow their own trajectories; and while Anna is progressively more immersed in an atmosphere she does not wholly belong, Petros cannot enter her new world.

The obvious incommensurability of proof and faith could risk a tedious dramatic treatment, but Frantzis and his co-writer Spyros Kribalis ensure that there are many scales and paths to go to, to  which we are not privy from the start;  this gives  the film a suspense character and a well-paced rhythm (barring some blunt dialogue lines, especially in the couple's early confrontation scene). Katia Goulioni gives a fine performance here, but she seems somehow miscast -she is a too strong persona to be manipulated by a bunch of (well-meant?) religious zealots. Andreas Konstantinou fits better with his wooden role of a narrow-minded intellectual, who can only make things for the worse, and supporting actors (especially Indra Burkovska as the teacher) are really a treat to behold.

The film features some indelible scenes: the christening of Anna in Siberian ice is a masterful composition of religious pathos elevated to a cross.  Derelict buildings tell a lot about long lost human connection as well. Frantzis chooses not to solve all the issues it opens up; Still River cleverly builds up conspiracy theories to abandon them at the end, but its thriller pace still won't flow satisfyingly with the big questions it raises. If science is not the answer to a happy household, and religion cannot give but heightened emotions, where is the middle-range emotion scale? It would seem that characters are too ready to travel from one side of the equation to the other, without anything really getting us accustomed for this (radical) change.

Which is not to say that Still River is not an moody arthouse thriller, careful not to lose itself in meditative thoughts. Without much violence and with a lot of busy souls scheming in Siberia, it flows along satisfyingly enough.