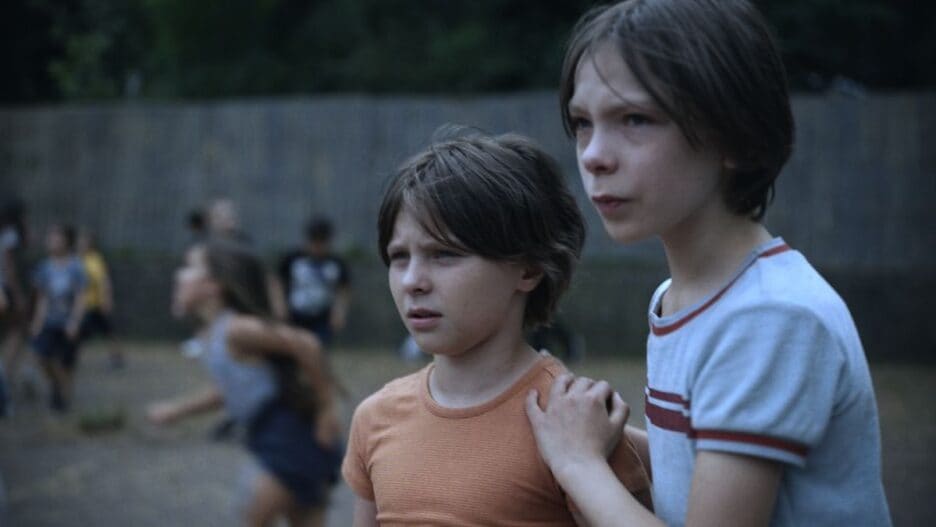 It takes only 72 minutes, but it feels like an aeon in the intense (but never claustrophobic), beautifully observed study of school bullying in Laura Wandel's first feature film Playground (Un certain monde). The Belgian film, which premiered at Cannes 2021 (Un certain regard, FIPRESCI prize) starts with Nora (Maya Vanderbeque), a girl who cries on her first day at school -being separated from her jobless dad (and no mum enters the equation).

Nora needs to survive in the multi-cultural school (and sometimes) rough school environment, and she's instructed not to rely on her bigger brother Abel (Günter Duret) -also at the same school- for help. Yet it is Nora who needs to take her decisions early on, and Abel who is the first victim of bullying by the older boys -with the teachers willing, but clearly unable to do much apart from acknowledging their own worries and failures.

The camera always present at Nora's height, mostly in medium shot, we are indeed led to pursue the course of things from her own standpoint -which is constantly developed. Nora may start as the crying baby (and refusing to eat her lunch on the first day at school), but she is clearly stronger than she looks -even when she struggles to perform the demanding physical exercises, part of the school curriculum. Wandel makes us fall for Nora, even when she's about to change and confront her brother, asking him to 'stand up for himself'. With a central character trajectory that moves from the uninitiated to the supporting sister to the cruel person, we do identify with Nora all along, as this were part of our school education. Even when the film goes dangerously close to fulfilling the Cain vs. Abel biblical prophesy, Playground still immediately dilutes these expectations.

Unlike Zoltán Fábri's 'The Boys of Paul Street' (1969), the incidents at Nora's school don't share the heroic character of the actions or the prominent group activity of boys/girl gangs. The bullies are mostly unnamed or irrelevant, while everyone can become uncomfortable at times, including Nora's own friends (who won't invite her to their birthday parties). The film shares some of the intimacy of René Clément's 'Forbidden Games' (1952) -and one relevant scene of animal burying. Yet it occupies the middle ground between grand actions and deadly, pessimisistic silence; each day at the school playground (the film never leaves the school setting) is a constant negotiation, and Wandel's handling of the scene structure is remarkable in its devotion to the small details that make the big picture.

Both Maya Vanderbeque and Günter Duret inhabit their respective parts with intensity and honesty, as if they were living each day at school being a new day, with an unexpected emotional spectrum to face and react. The film's aesthetics reveal a deep blue-colored school arena, in which (sometimes) the lighter colors Nora wears make her a quiet force to be reckoned with. School voices substitute music (end credits are silent).

'Playground' is a film whose observation of micro-details elevate it into a skillful, potent and still intimate study of school relationships; within its set space, it opens up the characters to experience a microcosm of their adult life, albeit with the same urgency and relevancy.