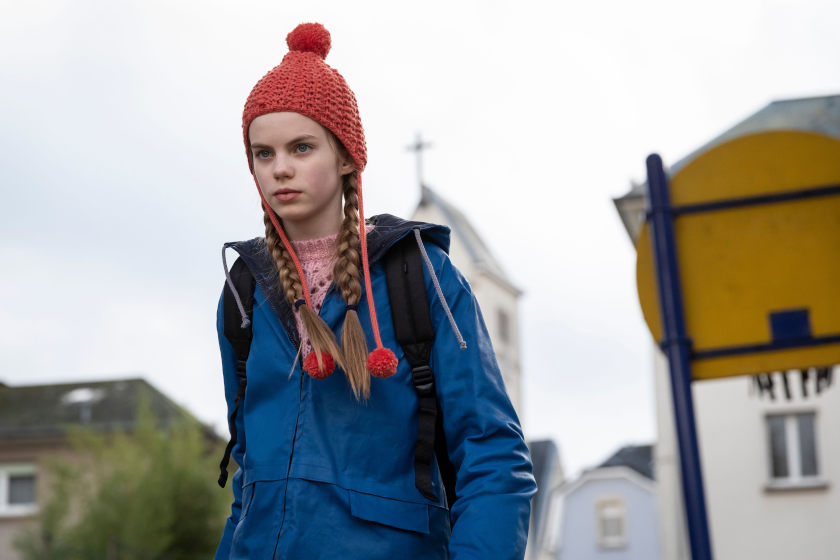 A prophet (and a meteorite) in our house, and our underlying values (usually unquestioned) are under attack. This is the premise of the lovable offbeat comedy Mission Ulja Funk, the debut feature by Barbara Kronenberg.

The 12-year-old Ulja Funk (Romy Lou Janinhoff), a determined Greta Thunberg character with her anorak always visible, she has more sense and reasoning (but less love granted) than her elders. Fascinated with science and the universe beyond her small community in the German heartland she lives; like Jodie Foster in Contact, she tries in vain to communicate her knowledge and the immediate collision of a meteorite with the Belarusian land. Her Russian-German grandma Olga (Hildegard Schroedter, a funny, later-age version of Abigail Breslin in Little Miss Sunshine) won't only disapprove of her granddaughter's behavior; she will simply lock her things in the church, run by the very individuated (and fishy) Pastor Brotz (Luc Feit).

Still, the team up of Ulja with Henk (Jonas Oeßel) another outcast -but with the ability to drive- will change the course of the events. The duo will devise a plan to witness and alert the meteorite collision in Belarus, moving through Poland. The yellow van of Little Miss Sunshine is now a black hearse, and there will be different incidents along the journey.

Kronenberg has the ability to orchestrate her characters in unison, with the result being neither a deadpan overall effect nor a caricature; there is space for everyone in the film to showcase their mix of ignorance, prejudice and a little bit of humanity in the process (even though the film sometimes tries too hard to fit in all the character's back stories into a single film). The road movie she crafts has the necessities of a well-oiled comedy plus a penchant for a young girl to do what her hearts wants.

The episodic structure of the road movie is carefully divided between Ulja and her 'hunters', the rest of the village who need to protect their own status quo of religion against science. Creationism vs. science and progress is a constant theme in the film which explores the deep prejudices still surfacing in one of Europe's richest country.

Ulja herself changes during the trip, especially regarding her relationship with the good-for-nothing Henk; it is an adulthood of sorts, yet Kronenberg's drama is more about building up stronger family and community relations than simple independence.

With a tempo that breathes and accelerates in equal doses, Mission Ulja Funk sometimes (especially in the Belarus section) feels forced, and its presented stereotypes are to mock, not to investigate. The film has its spirited energy, well-attuned performances and a direction that offers a still refreshing take of the old road-movie film concept.