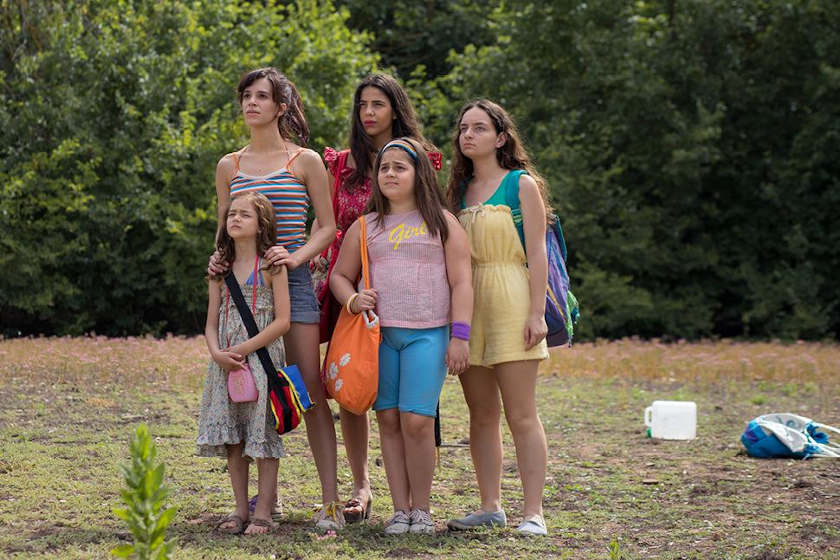 5 young sisters, Maria, Pinuccia, Lia, Katia, Antonella live off the doves they rent in Palermo weddings and events -their house is big, derelict but enclosing and never claustrophobic. On the top floor, an army of benevolent pidgeons (more in the style of On the Waterfront rather than in Hitchcock's The Birds) are ready to let themselves into the apartment and spread an "angelic" viewpoint.

Birds are always there in The Macaluso Sisters, present in the camera work and the dialogues, and a flock of them is always a reminder (sometimes too evident) of the lives of the sisters, both separate and common -whatever they do, they need to come back home for their dinner. Maria needs to be the dancer (and her young fling is the sweetest thing in the film), Pinucchia is the most earthy one, Lia has a traumatic experience and change, and Katia is torn between sororal love and her duty to be a good wife.

Dante uses three groups of actresses in the three parts of the film (based on her own stage play Le sorelle Macaluso), with as effortlessly colorful performances, from romantic to down-to-earth characters, and is a joy to watch their interaction -like parts of the same slices of life. The first part, filled in with laughter, dance, summer and movement will end abruptly into the second, sober and concerned part -many years later. The third part is the much-needed closure and redemption.

This classical narrative structure won't feel forced but rather welcome in the film, since energy between the characters is a constant source of interest. The same cannot be said of Dante's choices of magical realism, and bridging the past with the present -which looks over-symbolized in its many instantiations. Yet, The Macaluso Sisters has a knack and a fondness for details; the broken plate of 'special occasions' that Maria needs to fix so that doves themselves get their food; the door knob that it won't fix itself; the keys they need to be left at the special place when entering the house.

Running long enough to present its characters, and with a crisp editing between its set pieces, The Macaluso Sisters alternates between affection and anger (and some really well-orchestrated violent scenes) in a world where men are neither the heads of the family nor their desires are the most important ones. The film offers an ensemble of both the joy of life and mourning to be handled; it is affective, sprightly and still relevant.