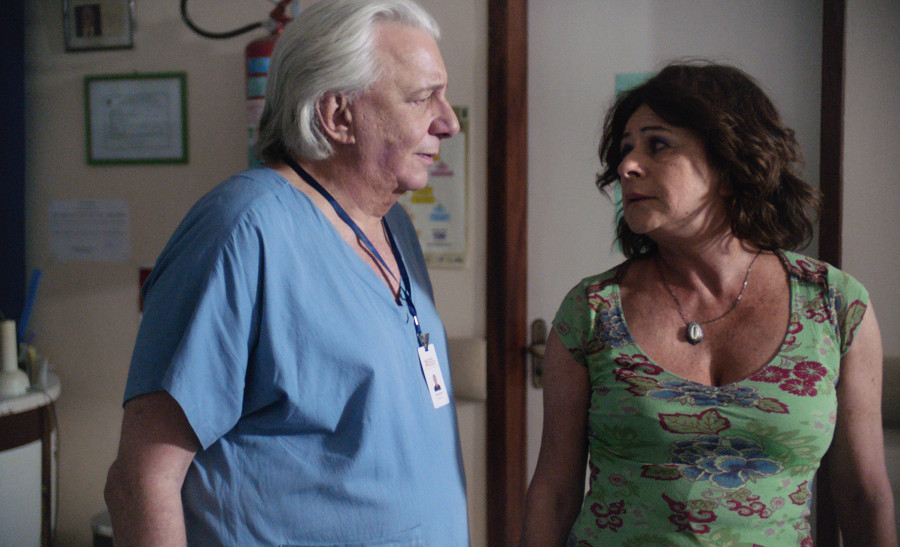 Seems the more the new Brazilian president Jair Bolsonaro speaks and acts against the LGBT community, the more thoughtful films come out of the country. Even though the screenplay was conceived and developed by Armando Praça back in 2008 (from a 1973 play by Fernando Melo), Greta, his first feature film, has all the relevance of post gay marriage worries -even though its politics are here rather subsumed by a finely attuned love story.

Premiered at the 2019 Berlin Film Festival (Panorama section), Greta tells the story of 70-year-old nurse (an excellent, nuanced study by Marco Nanini) who needs to find shelter for his transgender friend Daniela (played by Denise Weinberg) in the overcrowded Fortaleza hospital, Brazil. Daniela suffers from kidney failure, and she is panicked to move to the men's ward. Still, Pedro will take wounded man and murder suspect Jean (Demick Loes) out of hospital and into his home in order to make hospital space for ailing Greta.

"The only thing you take from this life is the love we have to give". This is what Daniela sings in a nightclub, Blue Velvet-like appearance (too stubborn to stay at the hospital), and defines the film angle, which focuses on tenderness at hostile times. The main relationship (and the film's better narrative half) here is between Pedro and Jean. Pedro is a diehard admirer of Greta Garbo's well-worn solitude motto ("I want to be alone"), and brave enough to enforce this to his own life, which seems to include -apart from his friendship with Daniela and casual sexual, club encounters- no deep concern about old people and forgotten movie stars.

In a world full of hypocrisy (sex is the traffic ticket always traded upon in both work and family life, but never publicly acknowledged), Greta makes it the case the only option for Pedro is Jean, a man who has no other options than to seek shelter, friendship and sex in Pedro's home.  Jean is more pragmatic but also more easily hurt than Pedro,  and he can easily slip to his female partner Mary (Gretta Sttar) when trouble comes around. But Jean here acts also as the reality check for Pedro, who otherwise would merge into the film's deeply blue and purple color palette.

The development of their relationship and its distractions (male prostitution under the clock, fear of being arrested, an even more ailing but still forceful Daniela) here seem to encompass an outside sphere of influence -but not an overriding one. For most of the film, Praça is not interested to explore the fears or the suspense of a relationship between an old gay and a murder suspect; whenever the film lapses into this territory, old stereotypes about gay victims seem to resurface. Even though you can feel Almodovarian cues, Greta takes action in present time, and no big family secrets are to be unveiled. This is a story of perseverance, mostly for Pedro, whose alter ego Daniela is a sad but true example of what aged LGBT people in need could aspire to.

Without being politically stinging, Greta is a deeply compassionate, but also sensuous cinematic effort on people willing to try be in love against all odds - their own convictions notwithstanding. With strong-willed characters (and equally competent performances), it balances a lost sense of queer glamour with a hard-won reality understanding.