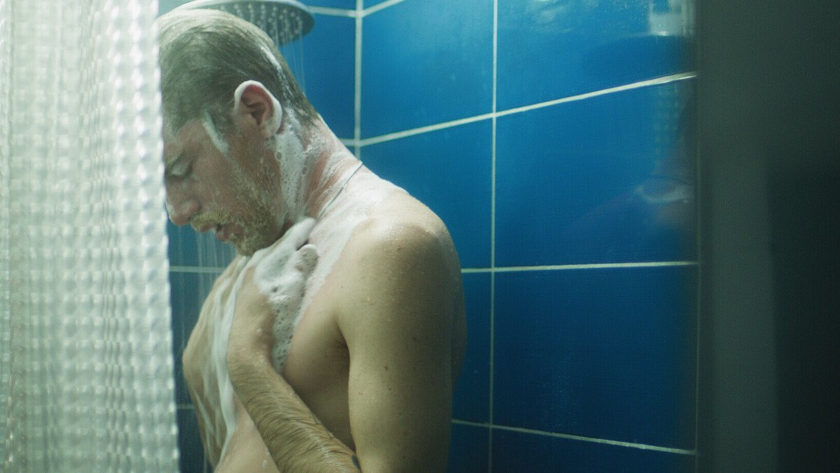 Idan Haguel's 'Concerned Citizen' film works mostly as a gentle (not easily identifiable) satire of white male privilege -transferred to an LGBT surrounding. In the very LGBT progressive Isreal (yet hints of homophobia are twice referred to in the film, including one from a police official). Ben (Shlomi Bertonov) lives with Raz (Ariel Wolf) in a state-of-the-art apartment in southern Tel Aviv; the neighborhood itself is Neve Sha’anan, a hot spot for immigrants settling -in the very building where the couple lives.

Everything looks fine in the couple's own life, full of an organic diet, gym-sweating, and a chance to become parents by hiring a surrogate mother and an egg donor via a small Tel Aviv agency. The couple is also a role model to their cis married friends. Things start unraveling when Ben plants a tree in the neighborhood: two young black immigrants lean on the tree, whose branches start to bend. An alert person, whose movements are always tuned in to pristine perfection, Ben, notifies the polices who beats the suspect to his possible death.

Guilt and gentrification run throughout the film, and the two axes stop aligning; suddenly Ben starts thinking of selling his apartment (to a rich Israeli expat), while Raz seems at a loss to understand his partner's estranged behavior.

A light critique of masculinity and entrenched roles as well (Ben proudly pronounces he will give his sperm for fertilization), the film follows a gay man who has similar qualms of being the father figure that a straight man does -and securing a safe zone for his family. It is significant in unveiling this tension, and clever in its final act where repetition proves to be a rewarding lesson for everyone involved.

Yet 'Concerned Citizen' seems more preoccupied with the main character's concerned attitude, and forgets the light-hearted gay attitude that his own partner showcases; even the sincere investigation of the Other is here predominantly marred as a duty, and not as an opportunity -and certainly not an adventure. Ben seems to settle down for a way to relieve his guilt at any cost rather than sincerely knowing his surroundings.

Both clean-cut cinematography and very energetic camerawork work in that direction, making the film a more heavy-handed affair than the situation would entail. The drama is more hinted at rather than actually experienced; 'Concerned Citizen' is a fine reminder of the need to constantly readdress rights and privileges, but it uses a very heads-on approach to address issues that are not eradicated by a simple act of redemption.

'Concerned Citizen' screened as part of the Discoveries section of the 2022 Nowe Horyzonty Festival.