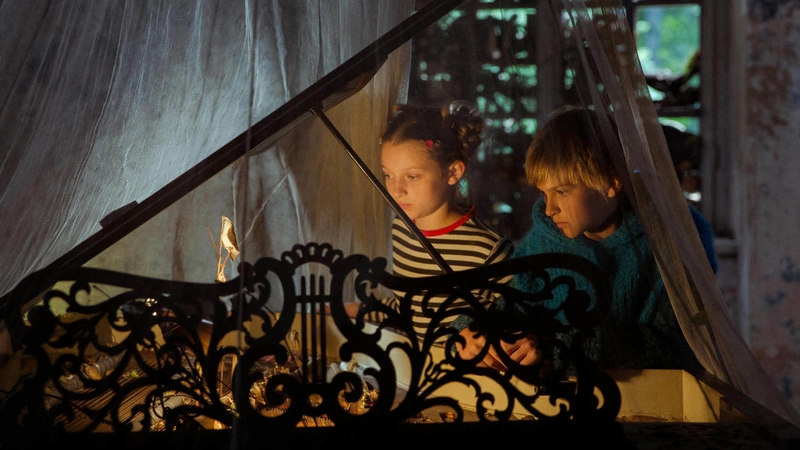 An open heart is hard to find, and Inesa Kurklietyte's heart-warming (even though with too many floating wings) 'A Butterfly's Heart' cares to show that an open heart needs to be protected as well - as a rare species.

It is the same protection that the small Juozapas (Elijas Malinauskas) has for his 'bug city', an abandoned manor in a small Lithuanian countryside town, bathed in light and filled with good summer spirits. Juozapas has a very rare disease condition: his heart is outside his body, and he wears a protective jacket to hide it -which makes him a ready-made subject for bullies from 'Boss' Bena (exquisitely cast Mindaugas Balabonas) and his gang of friends. Indeed, the first scene sets the tone of the film: Juozapas wants to cross the bridge from one side of the river to the other in his blue outshining sweater, yet he is turned back by Boss and his friends.

The drama opens when the same-age Rugile (an exceptional Vilne Konstancija Abukeviciute) moves with her mom to the small Lithuanian town; with her father in Spain (but still 'providing them with oranges'), Rugile joins the trio of character children, whose parents are unable or too dismissive to provide actual help for their children.

By a not-rare chance of fate (and an always wandering big cat), Rugile and Juozapas become friends, and he introduces her (and the audience as well) to the carefully kept bug care construction. Kurklietute and her DoP Viktoras Radzevičius are ready to offer a semi-hidden, semi-lit version of the inside; the production design makes it possible that the bug city itself is not just a CGI's delight, but rather a fine amateur's hand-made construction.

The three poles of the film (Rugile, Juozapas, Benas) may express different behaviors, but the script (by Kurklietyte and Modesta Jurgaityte, based on her book 'Special') makes it clear that the same old circumstances (the grownups) will ultimately define their behavior. In the case of the bad boy Benas, it is made abundantly clear that present bad tricks come from your genitors' own abuse (here a wannabe macho father).

The film is insecure about whether it wants to depict the mystery of nature and human nature or the nurture and bullying problem. As a consequence, it faces an uneven balance between expository and dramatic scenes in a school environment (in which the teachers are conspicuously absent). Its climax looks forced, whereas the resolution (and its ending, open sky poetry) is justified by the directors' own approach to human kindness.

This is a film for children that deserves to be seen not necessarily for the phenomenon of bullying itself, but for the interactions themselves between the different children and between children and their parents. It is always a miracle when kids finally grow up and become adults, and 'A Butterfly's Heart' shows them more independent and mature (and ready to be wrong, without being heroes). It is predictably elevating, but also empathetically told.