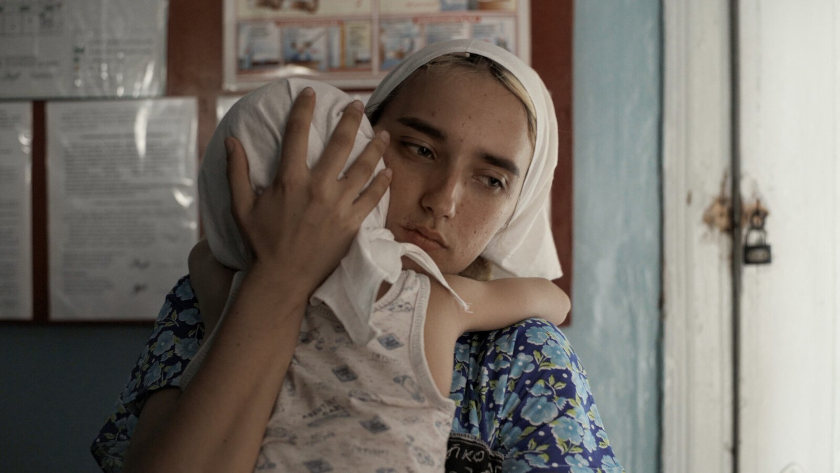 Imagine 'Chicago' without glamour (but still with beauty care), and no papers to catch the latest news, but a guard (still in the manner of Queen Latifah) who reads every letter the female prisoners write.

'107 Mothers', the Slovakian/Czech/Ukrainian film by Péter Kerekes, tells the story of Ukrainian mothers (or expectant mothers) and prisoners at Odessa women's jail. The film's documentary style embraces many portraits (initially in talking heads' status) talking about the reason for their captivity -to the eyes of the understanding but still morally stern warden Iryna (Iryna Kiryazeva). Iryna is at the age of being expected to get married -but she devotes her time to the prisoners -forgetting how to live herself, to the despair of her mother.

On the other side of the equation, the imprisoned women and their experience with men are equally forgetful -full of other lovers and crimes of jealousy, for which they show no remorse -regardless of age or educational background. Two women stand out in this group: Lesya (Maryna Klimova), whose bad relations with her relatives leave her indecisive, and the extrovert Nadia (Lyubov Vasylyna), who is sure to get parole and leave prison.

The main issue, as the film makes abundantly clear, is the fate of their young ones: currently in prison and to meet their mothers only during certain, prescribed hours, they are to be forcefully sent to an orphanage when they complete 3 years of age. Unless, of course, the mother leaves jail at that point or a relative undertakes to take them.

Time and time again we see the ritual of the 3-year-birthday-celebration that marks the separation between the mother and her child, as if an exercise for Lesya, the main character. Kerekes takes his time (sometimes too much) to show the exact workings of the prison and the daily routines -but we do sense this is not a prison drama where oppression is visible. On the contrary, everything is formal, routinely made, as if the authorities themselves had a job they needed to complete -and they are getting anxious to get out of prison as well (as in the scene where one prison guard tries her painted, made-up Louboutin, high heel shoes).

The two contrasting characters, Iryna and Lesya, are firmly portrayed on screen, both physically and in terms of traits that one character has and the other lacks. Lesya is mostly the lost (but not weak) young woman, and Iryna is the intellectually mature but emotionally still repressed person -in need of a revelation. The film does a good job of portraying some of the infelicities of the correctional system, where teaching by the book won't eliminate the feelings these women still feel about their actions.

And it has an empathetic and humane eye to all of its characters, as a tender family member embraces their children. Children are present in the film, but they are not to steal the show; it is their mother's own story. The outside world (relatives) is the real villain in the film with their own indifference, and they should have been portrayed further in the film; their interference makes 107 Mothers shine. Still, there is a sweet Odessa steps reference at the end of the film that makes you fall for the '107 Mothers', and makes it a film to cherish.